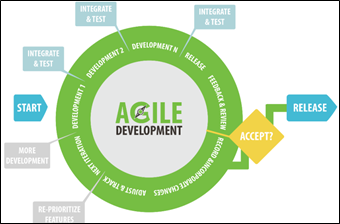 For the past 4-5 years at least, AGILE has been making the news almost daily in the industry and with the kind of methods that the teams are following to develop software and the nature of output while following AGILE. The practitioners are very happy with what they are following and the methodology is gaining popularity day by day. AGILE got its name as agile from the agile manifesto. A small group of people got together in 2001 to discuss about the software development methods that they were following and the shortcomings of those. During their discussion they laid down 4 values that they want to imbibe in the new software development methodology. Here are those –

These values became the core values of AGILE and the basic foundation on which the AGILE software development methodology is based on. While following these values in the AGILE projects that I have followed, I have further noticed some key ideas that can help you all while adopting AGILE and I am highlighting those ideas in the form of 7 key ideas over here –