In case of waterfall or other traditional approaches, we observed that each phase of the development process was allocated a time line and that phase was carried out based on the schedule laid much earlier in the project. Testing (and thus performance testing) came almost in the end of the cycle when app was first ready and then later when app was made changes (after bugs published in the first testing cycle). Testing in AGILE method follows a slightly different approach though. Here the activities related to testing the app begin right in the beginning of development and as soon as the first version of the app is made available, the testing is started.

This unique way of testing provides an opportunity to test the app such that different modules / functionalities (those developed in the early releases) get tested in isolation. It is like choosing some business processes and executing tests against those. This type of testing not only resolve issues associated with app design / architecture at a much early stage but also makes the application quite robust yet simple. Same goes with performance tests, as a new app is planned and activities related to its development are started, performance test planning and infrastructure set up also begins and right after first release (it may not yet be production release), the app is tested for its performance. Most of such tests would be nothing more than the tests designed to find bugs and bottlenecks by proactively searching for performance limits. It is here when the test driven development, risk based approach is followed and the app is critically tested for its more probable and highly impacting areas.

These tests are performed one after another in iterations till the performance issues are resolved across all different sprints. 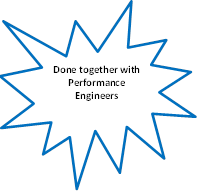 Some additional ‘Points to consider‘ while doing performance testing in AGILE: