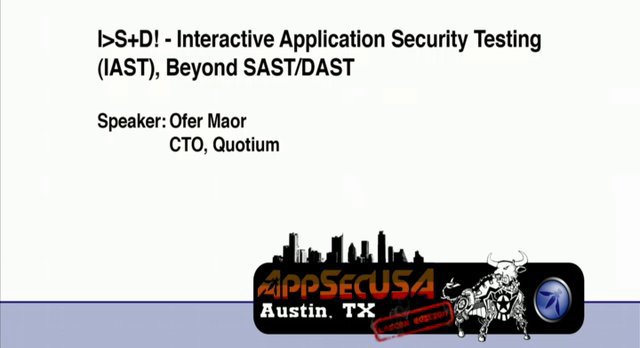 IAST is the emerging technology which is rapidly transforming the way code security is done. Instead of security being a pain and a worry, IAST enables a fully automatic process that ensures no code vulnerabilities creep in during development.

IAST technology works by hooking into the application and analyzing it from within as it runs. Just as a debugger would do, IAST looks into code execution in memory and seeks out specific events such as database queries, file system access, web service calls, input validations, and more. These events are analyzed to see how they may lead to vulnerabilities.

Currently there are two approaches to IAST:

For this reason we focus this explanation on Active IAST, ideally paired with data flow analysis.

A basic deployment of Active IAST requires two components: one is a component that monitors the application and the other is a console that drives simulated attacks. These components work together to see how the application will behave under a real attack to see where and how it is vulnerable.

Analyzing the application in runtime allows to accurately see how vulnerabilities happen (for example – track user input from the moment it enters the application, through the point it goes into a database query, and up to a point the database returns a dataset which is then returned to the end user). It also provides an accurate location of the problem in the code by analyzing the runtime and tracing it back to relevant code. Even if no code is available (3rd party components or on-the-fly code) it would still provide the location of vulnerability.

Using the runtime code analysis agent, it is possible to monitor everything taking place in the code execution and memory of the process, including (but not limited to):

What are then the advantages of this technology?

Do you want to see it in action ? REQUEST A DEMO